Have you ever read some article that tell about the simplicity or easiness of Indonesian language? And do you believe that?

Indonesian is a success story for new lingua franca for a new country in the early 20th century. This language is developed from Malay language and decided to be the national language in Indonesia. For centuries, Malay was one of the widely used lingua franca in Nusantara, nowadays it’s part of Indonesia, Malaysia, and Southern Philippines. The vocabulary is rich by absorbing from many languages, Sanskrit, Dutch, and recently English. It’s also used Latin script and sometimes look like another Indo-European language. Just take a look at this sentences and please leave some comments below, do you think that it’s resemblance one of Indo-European languages? 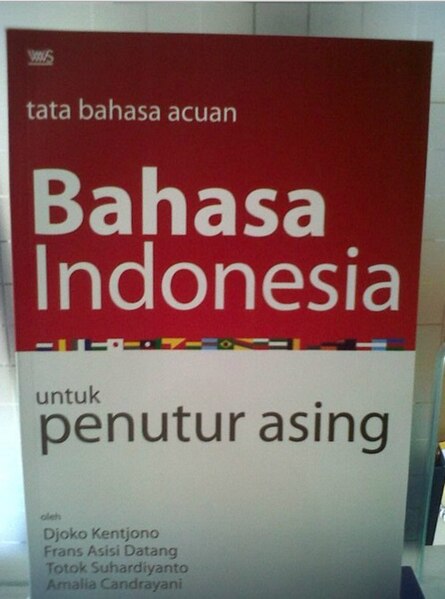 A book cover of Indonesian for Foreign Speakers. Photo by: Sania Amalia, CC-BY-SA 4.0

Affixes are definitely the hardest part of Indonesian. Indonesian has four types of affixes, such as prefixes | awalan, suffixes | akhiran, confixes | apitan, and infixes | sisipan. Infixes are limited only to several words and it’s very active than others.

Although Indonesian doesn’t have tenses, it has a complex verb conjugation. It’s just like English which has a lot of affixes, such as blindness; -ness is a suffix, usually changes the adjective into the noun. For example ‘membeli‘, from the root word ‘beli‘. Beli can change into pembelian (buying), dibeli (to be + bought – passive voice), terbeli (buyable), membelikan (buy for), etc.

Formal Indonesian is rarely used in a daily basis. It’s mostly (only) used in the formal occasion. So, if you learn Indonesian from book, school or college, it’s likely using the formal register. Indonesia has more than 700 languages, so the Indonesian language has a lot of dialects. If you’re in Medan, the dialect is heavily influenced by Bataknese, the same thing happens when you’re in Semarang (Javanese), Surabaya (Eastern Javanese), Bali (Balinese), Ambon (Ambonese Malay), etc. So, don’t be panic if the language you learn formally in the school, it’s very different from the ‘real life’.